* In case of any delay in receiving the OTP, you may verify it later. Please proceed without verification.

Situated at the banks of Ganges canal and based between the National capital Delhi and the beautiful city of Dehradun on National Highway 58, is the magnificent town of Roorkee. The most attracting feature of the said town is the Upper Ganges canal which flows in such a way that it divides the city in sections. Famous for being the base of Bengal Sappers and being a prominent destination of famous educational institutes like IIT Roorkee and having pious religious shrine like Sarkar Sabir Pak in Piran Kaliyar village makes Roorkee, a prominent tourist place in Haridwar district. Apart from the attractions of Roorkee that catch the eye of every vacationer there remains also the vicinity to various prominent tourist destinations that make Roorkee popular. There are several weekend getaways which can be enjoyed by traveling few kilometers and can be reached within hours from Roorkee. Some of these destinations are mentioned below: 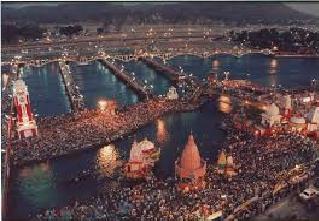 Situated at the banks of River Ganges, Haridwar is a pilgrimage center visited by millions of devotees each year. It is one of the seven holy cities as per the scripts of Hindu religion and is believed to be the abode of Hindu God Vishnu. The city has been mentioned in several Hindu epics and it is often known as the “Gateway to Gods”. It is also the starting itinerary for Char Dhaam destinations. According to the popular belief, a dip in the holy waters of Ganges in Haridwar frees the soul from all sins and blesses it with purity.

Popular tourist places in Haridwar are Har ki Pauri ghat, Shaktipeeth temples, the evening AArti and many other religious temples of several Hindu Gods. The most popular festival here is the Kumbh Mela which occurs every twelve years and ardh Kumbh mela which happens every six years. Millions of devotees gather in Haridwar during this period.

How to reach: Since the distance from Roorkee to Haridwar is quite less, the best way to travel is by taking a private taxi which can cover the distance in less time and with charges of not more than Rs 350. Apart from this there are several trains from Roorkee Junction to Haridwar traveling on daily basis but takes more time than private car. There are government buses which can also be taken to travel the distance.

Located at a distance of around 20 kms north of the holy city Haridwar lies the religious place Rishikesh, on the banks of River Ganga and at the confluence of the latter with River Chandrabhaga. The place is famous for its religious importance, and often called Devbhoomi for its prominent mention in Hindu mythology. Based at the foothills of Himalayas in Dehradun district, the particular spot is visited by many tourist and devotees round the year simply to explore the natural beauty and offer prayers at the holy shrines spread across the city.

Some of the popular places in Rishikesh are Kunjapuri Temple dedicated to Goddess Sati, Neelkaanth Mahadev Temple at the confluence of Pankaja and Madhumati rivers, Vishnukoot, Maniko\ot, Brahmakoot, Dhivpuri Temple and Triveni Ghat. Vashishta Gufa is another of the prominent place visited by the vacationers. Apart from this there are several ashrams which are quite popular among the devotees. Yoga and meditation is hugely practiced in these ashrams which attracts the visitors. One of the best ways of enjoying Rishikesh is by trekking long routes amidst the beauty of nature in several trekking routes like Kalindi Khal Trek, Kauri Pass, Bhuwani Neergud, Kankul Khal Trek etc.

How to reach: The best way to travel from Roorkee to Rishikesh is through Railways. There are two direct trains from Roorkee, Sgnr Rksh Exp.and Hemkunt Exp which travels at much lower fares to Rishikesh almost daily. The train fares of these two trains are Rs44 and Rs 76 respectively. Apart from this there are buses which can also be availed for traveling. However, there are no flights routes in this distance.

Established in 1983, Rajaji National Park is a beautiful tourist spot located at a distance of around 6 km from Rishikesh and spread over an area of 820.42 sqkm. Being a combined area of three sanctuaries mainly Rajaji Sanctuary, Chilla Sanctuary and Motichur Sanctuary, it is the home for more than 300 species of birds and 23 species of mammals. The major animals in this park are Asian elephants, bears, tigers,king cobra, wild boars, panthers, sambars, wild cats, , Indian hares and kakar. Beautiful valleys, hilly terrain are some of natural attractions of Rajaji National Park.

How to reach: The best way to travel to Rajaji National Park is by private taxis at much less cost. The average fare by private car is within Rs 700.

Situated at the foothills of Shivalik ranges at a height of 2100 feet, Dehradun or the popularly known Doon Valley serves as the capital of Uttarakhand. With River Ganga in the eastern side of the city and River Yamuna on the western side Dehradun is a combination of massive panoramic beauty and natural excellence.

Distance from Roorkee: 71kms
Time by Road from Roorkee: 1hr 10mins
Best time to visit: Round the year except January where there remains snowfall and freezing temperatures

How to reach: Though the fastest medium of traveling from Roorkee to Dehradun is by private cars but the medium of transport can be quite costly. Apart from this the best and convenient mode of traveling the distance is by trains which takes a time of almost 2hrs but it is cheaper and comfortable too. There are 5 trains from this Roorkee which includes Dehradun Shtbdi (12018), Ndls Janshatabd (12056), Ddn Asr Express (14631) and Ddn Ndls Ac Exp (12206) etc. The train fares starts from Rs 63 onwards.

One of the primary locations of tourism in Uttarakhand is the beautiful city of Mussoorie. With an elevation of 1880 meters, the city is a magical portrait of natural beauty and scenic excellence which makes all vacationers go mesmerized with its panoramic view. Apart from having photogenic beauty the place has also historical significance since it served as a place of summer retreat to the British officers stationed in India.

One of the major attractions of Mussoorie is the Mall which serves the heartland of the tourist place and almost everything is available here. Several hotels and restaurants are placed here along with several shops of quality products. One can also enjoy cable car ride here while traveling to Gun Hill or can have a beautiful nature ride through Camel’s Back Road enjoying the beauty of the Himalayas. Apart from this there are several lakes and gardens which can be enjoyed here. Boating is another popular activity enjoyed by the tourists here.

How to reach: Since there are no flight options, the best way to travel to Mussoorie would be by train till Dehradun from Roorkee and then by hiring a private car to reach the destination. The train which remains available everyday is Dehradun Shatabdi (12017) which reaches Dehradun in a time of 1hr 58 mins and the fare is around Rs 250. From Dehradun there are plenty of traveling options like private cars which charges around Rs 500 or State Transport Buses which travels at a minimum cost of Rs 60 to Mussoorie. The distance from Roorkee to Mussoorie can be travelled by private cars too where the time of travel is much less but the fares are close to Rs 1000 or more.

Founded by Lord Lansdowne, Viceroy of India, 1887 , this perticular hill station lies in the Pauri district and serves as a popular tourist place at an elevation of 1706m from sea level. The unpolluted enviourment and heavenly peaceful surrounding, the unexplored natural extravaganza makes Lansdowne a beautiful option for a relaxing holiday for every vacationer. The most attracting feature of Lansdowne is the marvelous beauty of pine and oak trees bordering the city and serves as a prominent place of eco-tourism.

How to reach: The best way to travel from Roorkee to Lansdowne is by private cars which can be a little costly but the place can be reached in quite less time. The fares for private car to travel the distance would be around Rs 2000. However, one can also travel by train where one needs to stop at Najidabad or Muzampur and from there take a private taxi to Lansdowne. The total cost for this travel would be around Rs 1000.

Located in Uttar Pradesh, Meerut is the 14th fastest growing city in the country and 63rd one among all cities of the world. Several industries have grown popular in this part of the country and it also serves as the largest producer of musical instrument, sports goods in the country and bicycle rickshaw in the world. The city has quite famous for its skillful labor and dedicated involvement towards the development and growth.

The major tourist places in Meerut include religious places like Mansa Devi Temple, Chanda Devi Temple, Jama Masjid and Shri Shantinath Digamber Jain Temple. Apart from this there are popular holy shrines like Shahpeer Sahab ki Dargah and Bale Miyan ki Dargah which pull in devotees from all parts of the country. There is an ecological park and Appu Ghar which also serves as a major entertainment place in Meerut.

How to reach: The best and the most convenient way of travelling to Meerut is by trains. The fares for train ride are as low as Rs 100 and there are availability of the same almost everyday. The major trains travelling through Roorkee, Meerut route are Ddn Janshtbdi (12055), Dehradun Shtbdi (12017), Ndls Ddn Ac Exp (12205), Bl Haridwar Exp (12911) and Uttaranchal Exp (19565).

Based at the Tehri Garhwal district of Uttarakhand, lies the beautiful religious tourist destination Devprayag. The main attraction of this town is its location which happens to be at the confluence of two major rivers Alakananda and Bhaghirathi. The place has huge religious sentiment attached to it specially from the Hindu religion and it was often mentioned in the holy scripts with different names like Brahmapuri, Srikhand nagar etc.

Devprayag has a number of sightseeing spots like the confluence of the rivers, the river suspension, several popular temples like Dashrathshila Temple, Raghunath Temple and Chandrabadani Temple and many others.

Distance from Roorkee: 125kms
Time by Road from Roorkee: 2hr 10mins
Best time to visit: All year through except the monsoon season where roads can be bad for traveling

How to reach: The best way to travel from Roorkee to Devaprayag is by opting a car ride which travels in much less time yet it is costly than other medium of transport. The cost of private taxi ride would be around Rs 2200. Other than one can travel by trains and take a car ride from Raiwala or Jwalapur where the time of travel would be less and the cost would be around Rs 1700.

Though this are few of the popular tourist spots around Roorkee within a cap of 150 kms from the city there are others which also are good tourist spots and falls within 200 kms or little more from Roorkee. Some of these spots are Saharanpur, Paonta Sahib, Kuchesar, Chakrata etc. which can also be visited for a perfect weekend getaway.

Enjoying the nearby places around Roorkee can be really worth and it guarantees having a beautiful experience and a great holiday.