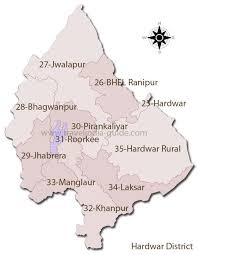 Spread over a smooth and even landscape with the pictorial view of the snow white gigantic Himalayas in the East and North East part, Roorkee is a beautiful yet small city in Haridwar district of Uttarakhand. The most attracting feature of the city is its position on the banks of Upper Ganges Canal which flows north to south straight to Haridwar 30 kms away and divides the city making a beautiful geographical base for Roorkee. It is also famous for being the gateway of some of the important pilgrimage centers like Kedarnath, Badrinath, Hrishikesh and Haridwar. It is also much closer to the country Capital New Delhi since the same is only 172 kms away.

The city was earlier considered a part of Uttar Pradesh till November 8, 2000. Based on National Highways 58 and 73, this city is well connected with roads and railways.

The major religion base of the city is of Hindu religion with 60 percent population share, followed by 29 percent Muslims, 9 percent Sikh and Punjabi and the rest Christian and Jains. With such a high population the Roorkee Metropolitan is considered as the fourth largest among the other Municipal Corporations of Uttarakhand after Dehradun, Haridwar and the 3rd being Haldwani.

The languages spoken in Roorkee are majorly Hindi with other languages used Urdu and Punjabi.

Roorkee city is famous for its geographical position and it also influences the climatic condition of the place. According to studies, an absolute unpredictable continental climate prevails over Roorkee, majorly because of its closeness to the giant Himalayas. Altogether four prominent seasons are there in Roorkee city. Summer starts from the month of March and extends till July with temperatures hovering around 280C. After July, the climate shows huge change since it is the monsoon season characterized by torrential rain. Since the Himalayas block the monsoon clouds. This season continues till October month. Post-monsoon season the weather remains pleasant and temperature records around 150C to 210C. The next season is the winter season which starts from December and stays till February with a freezing cold weather with occasional cold waves, a result of the katabatic winds which flow in from Himalayas.

Average Rainfall in a year in Roorkee is around 2600mm.

Roorkee is basically a city on the banks of Upper Ganges Canal with not much soil variations. The soil type around this region is none other than alluvial soils found in the Ganga plains along its course. The soil here is extremely fertile and it helps a lot in cultivating various agricultural products. Some of the prominent crops grown here are rice, moong, wheat, urad, sugarcane, mustard, and maize.

The major water resource of the city is none other than River Ganga and the canal is to help not only the people of Roorkee but with the best irrigation system, it facilitates more than 5000 nearby villages. It helps a lot in the agricultural business in the city thus contributing in a huge way in the economy of Roorkee along with its district and state.